Watching the water levels change in the Ohio River is my favorite part of driving to school every day. When I see it rising high enough to start entering the flood plains, I never fail to get excited. This always means two things: Any eddies you can find on the main stem of the Ohio River should be full of fish, and all of the creeks should also be teaming with fish escaping the high current.

The river was starting to reach that magical height when I decided to play a risky game. One of my favorite challenges in fishing is using an ultralight setup in the most difficult conditions possible, and the Ohio River never ceases to offer opportunities to test your abilities. On a lovely Sunday afternoon, I found myself beside the boat launch at Angel Mounds armed with a couple of my lightest rods. I rigged them with a simple, tight line setup with nightcrawlers and cast them into the current break downstream of the launch. It didn’t take long before my first rod bounced and I set the hook into a lovely little Channel Catfish.

It seemed like every ten minutes or so, a rod would bounce and I would reel up a small Channel Catfish or Freshwater Drum. I played with these fish until some large logs got washed downstream into this eddy and made fishing impossible.

The water stayed high throughout most of this month, so I spent a lot of time creek hopping. [Location name redacted] is one of my favorite places to fish when the river levels are high. This backwater creek is always full of species that many people don’t target. I usually target the deeper sections of the creek early in the year, but with the temperatures starting to creep higher the fish have been moving to the shallower sections of the creek. These fish are always easily spooked, but that makes the challenge of catching them all the more fun. On my first hike back to a shallow stretch here, I thought I spotted something I hadn’t seen in two years: a Grass Pickerel. But before I could investigate, the fish vanished across the creek. I managed to scare this fish off during my next three ventures, but on a lucky hike, I managed to catch it off-guard and landed a small jig right in front of his face. To my surprise, the fish made a quick dash and my jig vanished. I set the hook and was delighted to see a small Grass Pickerel.

After documenting its size and location, I released this little fish back into the creek and moved on to my next spot. The lily pads have started to grow here and a decent number of predatory fish are taking advantage of them as ambush points. Like this little Largemouth Bass.

Another stretch of this creek held a fish I hadn’t seen inhabit this waterway before: a little Redear Sunfish. It turns out that this section of the creek now houses a large number of these fish! I’ve fished this creek for years and this is the first time I’ve ever seen them, so that is a pretty interesting new change. 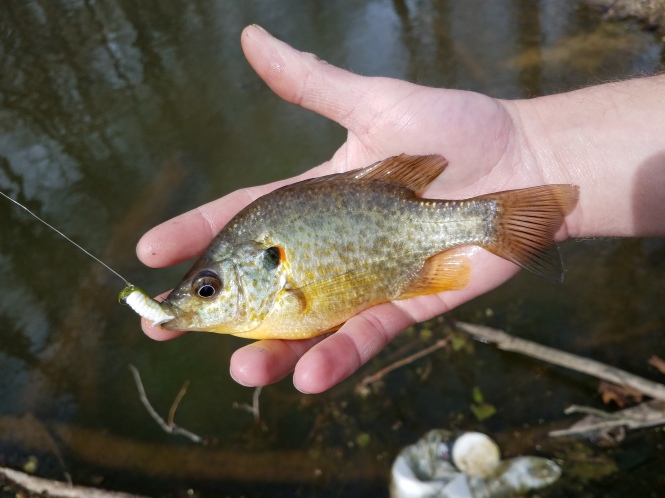 I couldn’t give up on this spot until I caught one of all time favorite fish, the Flier Sunfish. This one had to be tempted with Bee Moths put on the smallest jig I could find.

This little stretch of the creek housed some amazing panfish diversity. Tossing my jig toward a branch that was partially submerged, something darted out and attacked my jig but managed to miss the hook. I tossed back into that spot, and this time the fish didn’t get as lucky. After a quick fight on light tackle, I was greeted with a feisty little Warmouth. These guys start getting abundant in this creek come May.

That same branch seemed to be home to another similar species: the Green Sunfish. My favorite comparison I’ve heard is that they are the “micro version” of a grouper, and I couldn’t agree more. They put up a great fight on light tackle and are very willing to hit most baits. 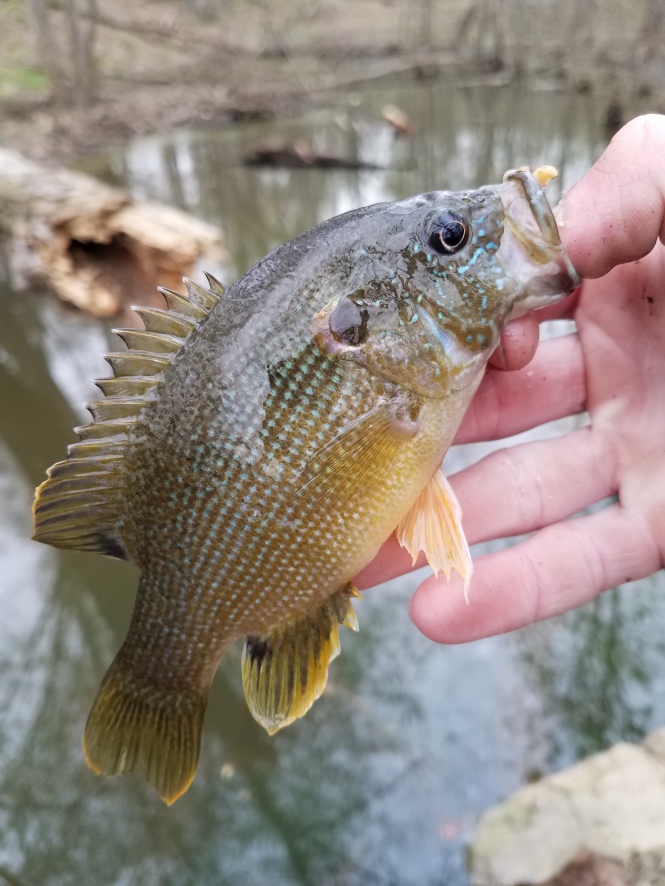 As the month continued, the weather kept getting nicer and more people have been deciding to get out and go fishing. I’m always excited to see people out fishing and enjoying nature, but this is usually when I start going to some of my more remote places where I know less people will be at. This led me to one of my favorite little creeks in Evansville: Locust Creek. This creek is always filled to the brim with Creek Chubs, and this is the time of year when they are all getting ready to spawn. My main goal of the day was to catch some small ones for bait on Pigeon Creek, but I was also hoping to hook into a spawning male. After filling my bait bucket with enough small creek chubs to last the day, I turned my attention to trying to catch a larger male. Before long, I set the hook into what I suspected to be a small Largemouth Bass, but turned out to be a large Creek Chub in full spawning attire. During spawning season, the males grow tubercles and in this case also took on the rusty orange color that adult creek chubs can have.

After happily catching my fair share of Creek Chubs, I packed up and drove to my favorite section of Pigeon Creek. After a long hike with a very heavy bait bucket, I set up my three rods in hopes of finding my first Flathead Catfish of the year. The bite was incredibly slow and the fish seemed to be remarkably skilled in hitting my bait and then instantly snagging my line around the debris on the bottom of the creek. But after an hour of frustration, one of my poles doubled over and the battle was on. I carefully worked the fish out of the log jam it tried to wrap itself in and was thrilled to see a Flathead Catfish finally break surface.

I couldn’t pass up the opportunity to try to catch one of the Gar that I kept seeing surfacing around me. I finally found one that was cruising right below the surface, and I quickly put a minnow on a treble hook and cast out in front of it. The Gar dashed forward at the minnow and then dived, and my instincts said to set the hook (but I’ve made that mistake enough times to know better). So, I let the gar swim with the minnow for about 45 seconds before setting the hook, hard. The hook set perfectly in the lower jaw and I was able to easily reel in the Gar. I was even more excited when I realized that this was actually a Spotted Gar, a species that I didn’t have on my list yet.

Toward the end of the month, I returned to [location name redacted again] to see if any new species had moved into it yet. I was happy to see some Gar spawning in the backwater creek and even a few Bowfin cruising around. Sadly, my ultralight setup was not ready for the challenge of one of these toothy critters. I switched my attention back to the panfish- hoping to find a Redspotted Sunfish in Evansville. Unfortunately, the closest population I have found is still in Winslow, Indiana. However, the creek still has a stable population of Bluegill, Warmouth, Green Sunfish, Redear Sunfish, Black Crappie, and Flier Sunfish. 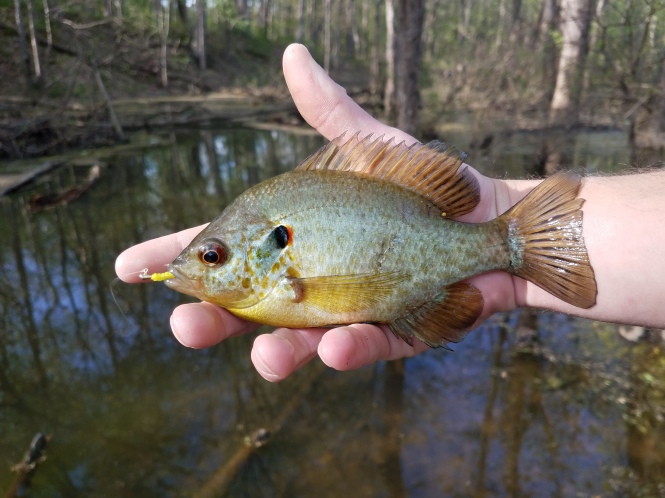 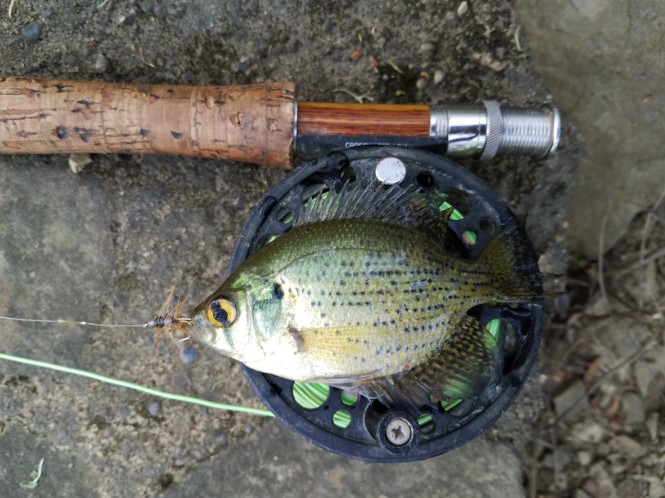 I still hadn’t caught a decent Spotted Bass this year, so I headed to the river to try to change that. The boat launch at Angel Mounds has a fantastic current seam that always holds a few bass when the river is rising. I set up two catfish rods like usual, and then started tossing around a small white curl tail grub on my ultralight rod. It didn’t take long before I felt a bump and I set the hook into the first species of the day: a little Striped Bass. 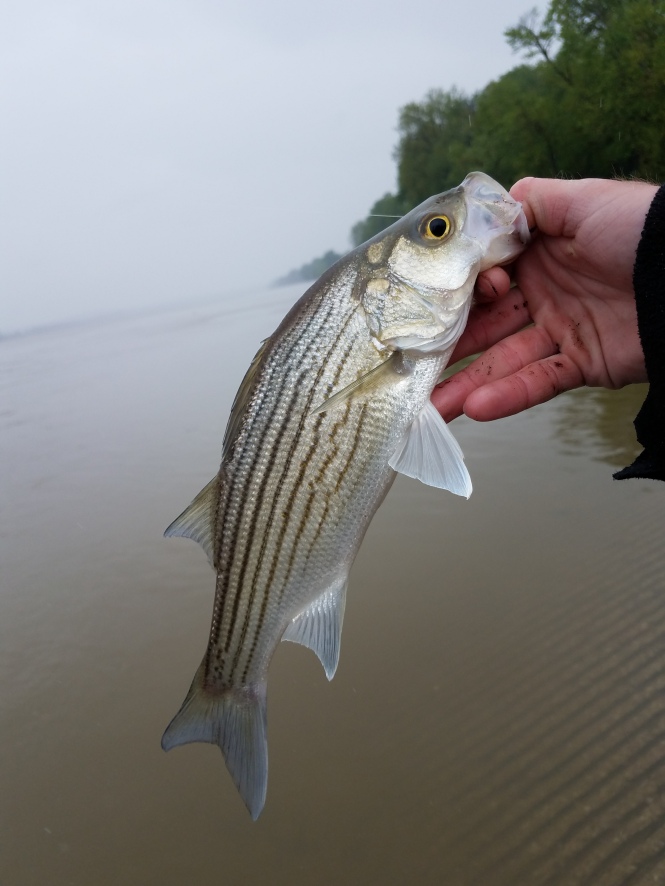 The next fish to fall victim to the lure was a Skipjack Herring, the first one I’ve found this year. I ended up catching two of them and keeping both as catfish bait for a later trip. 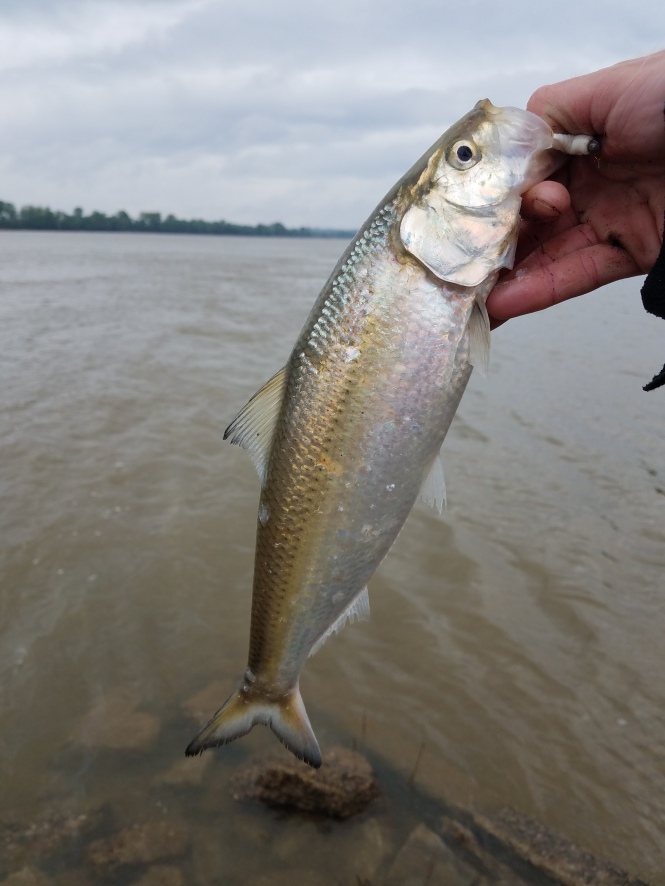 After catching a handful of Striped Bass and White Bass, I finally had a hit that felt distinctive from the others. I set the hook and this one fought differently. A short fight later, I was holding my first half-decent Spotted Bass of the year. 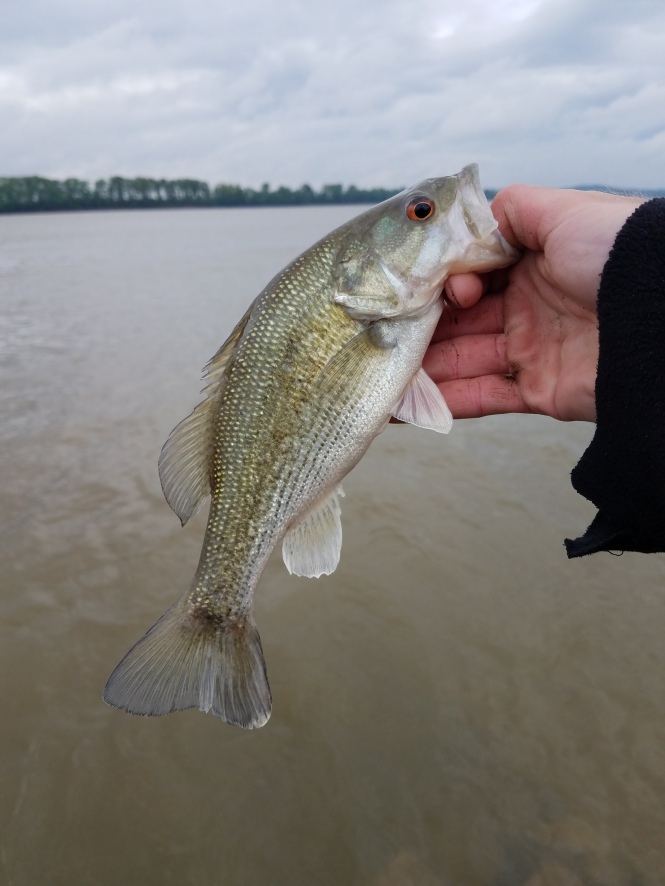 The bait rods started getting hits, but they kept managing to miss the hook. After multiple failed hook sets, I connected with one of the small Channel Catfish that were crowding this spot. 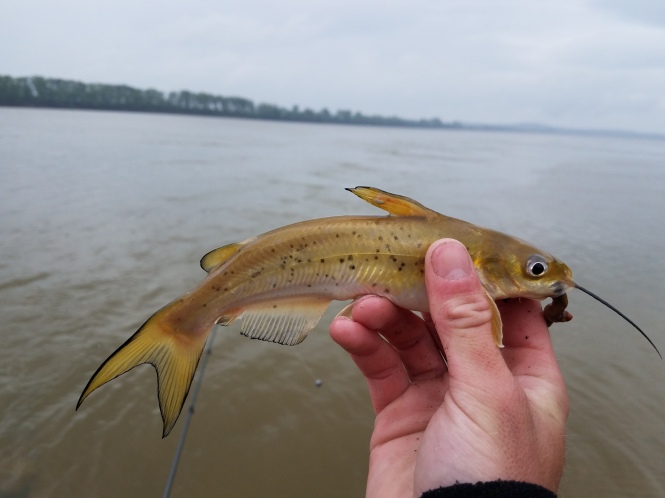 This was a rare occasion where the Freshwater Drum were slower to find the bait than the catfish. But eventually, I stumbled across a small one.

Because I was getting so many small bites, I decided to downsize my hook size. This quickly resulted in what most people around here refer to as a “river minnow”- or if you are into identifying fish (like I am) a Silver Chub. This was another exciting catch since it was a first for my species list! 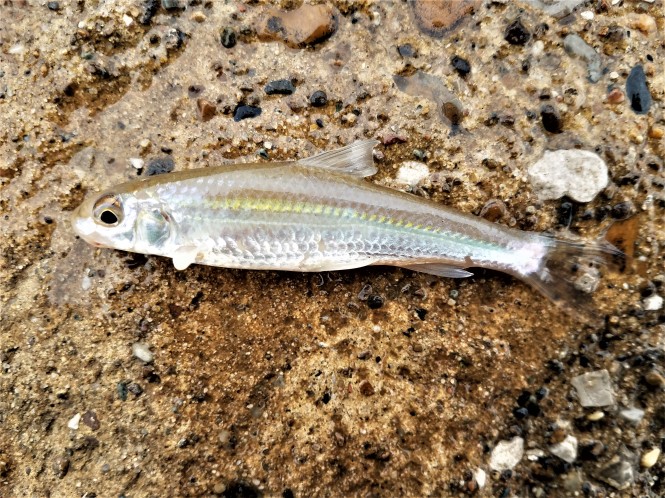 The White Bass were getting active, so I couldn’t resist trying to mark off another item off my bucket list: catching a temperate bass on a fly rod. I tied on my last Clouser Minnow and got to work. It took a while, but finally my line twitched and I set the hook into the first of many White Bass. 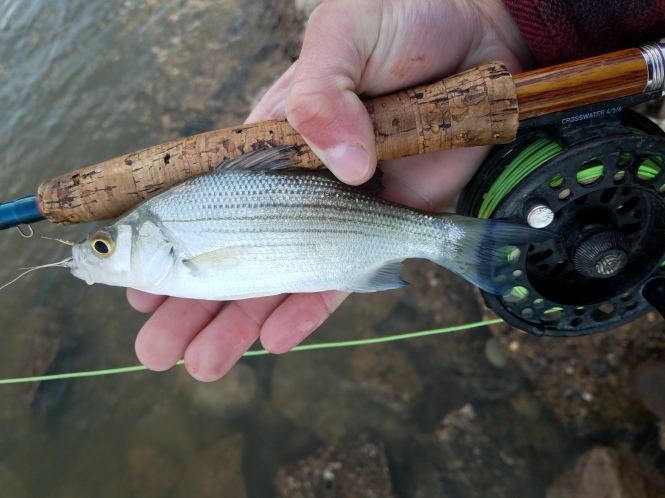 My success at fly fishing left me feeling accomplished, so I decided to explore some of the water upstream of the boat launch. I decided not to tempt my luck too far and only took my ultralight rod and a container of nightcrawlers. The real highlight of exploring this new stretch of water was hooking into a lovely little Longnose Gar.

While I’ve enjoyed fishing the river, this has really been one of my best years fishing backwater creeks. I would highly suggest that any of you with access to places like this try exploring them. A lot of very cool, overlooked species are living here, and better yet, you usually know you are the only person who is fishing these spots. I will always pick these hidden backwater creeks over a trophy Largemouth Bass lake any day, and I hope you will consider giving it a try, too.