February has been a very odd month for me. I usually looking forward to the late winter/early spring flooding, it always makes for a new and challenging environment to figure out. But this year I was bested by the season. To my dismay at the end of January I got very sick and stopped fishing. At the same time I strained my leg really badly. Because of being so sick my leg didn’t heal like it should. Once the doctors figured out how to treat what was wrong with me, we addressed the issues with my leg. When I started physical therapy I was missing 77 degrees of extension. I was totally dependent on crutches and was still weak from being sick. It took the whole month of February before getting back to feeling like myself again. I have worked really hard and regained my full range of motion and no longer need crutches.

With all that being said, I really didn’t manage to fish much until the last half of the month when I started regaining my strength. I started small. I would stop at a small creek and fish for Creek Chubs for a half hour (a fish that no matter the conditions is always willing to bite). And then would retreat back to the house to rest. 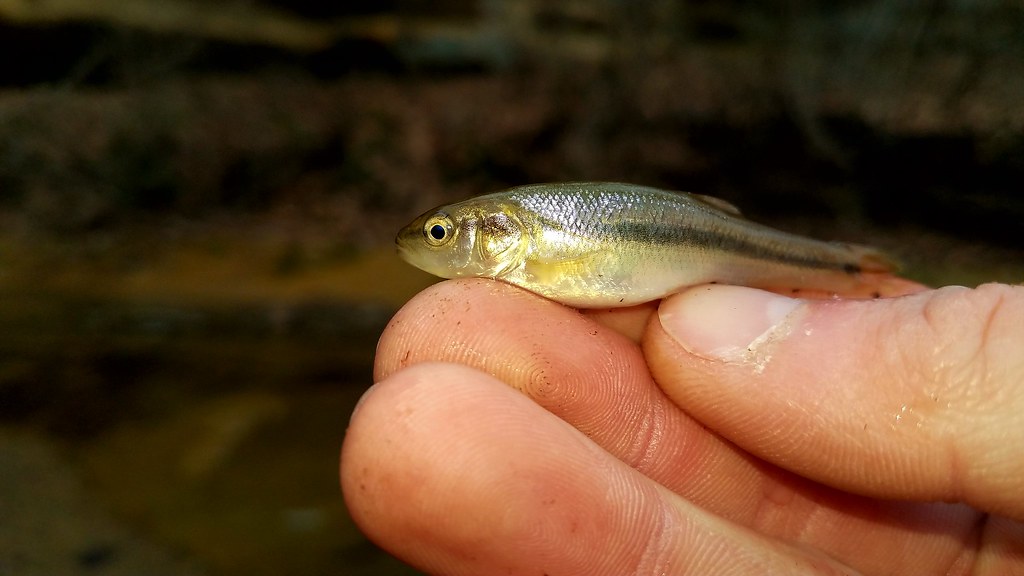 As I got more confident walking around on my crutches I started parking my SUV close to lakes and walking short distances to try for bigger fish. I would rarely get further than 100 feet from my car, but that was usually far enough to catch a few fish. I would settle down in a chair or lean against something and fish until my leg started hurting too much. I was fortunate and would usually catch a fish or two before getting to that point. This helped me fight the cabin fever. 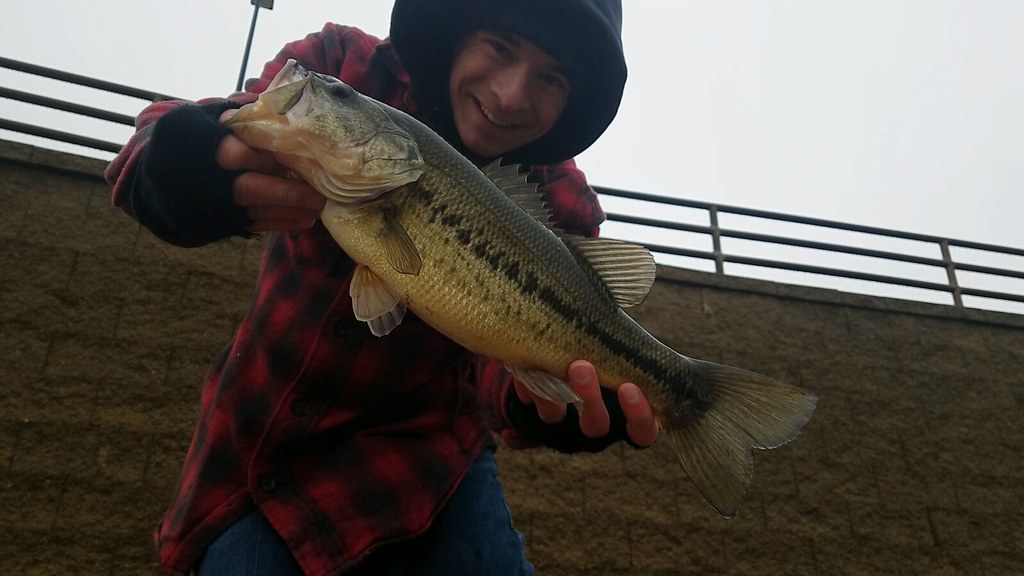 I kept working on building my strength and got to the point where I could make one lap around a small pond on my crutches without getting too tired. This let me start fishing more moving baits and get a few White Crappie. A fish that I usually devote a large part of my February to, and I was starting to miss them. 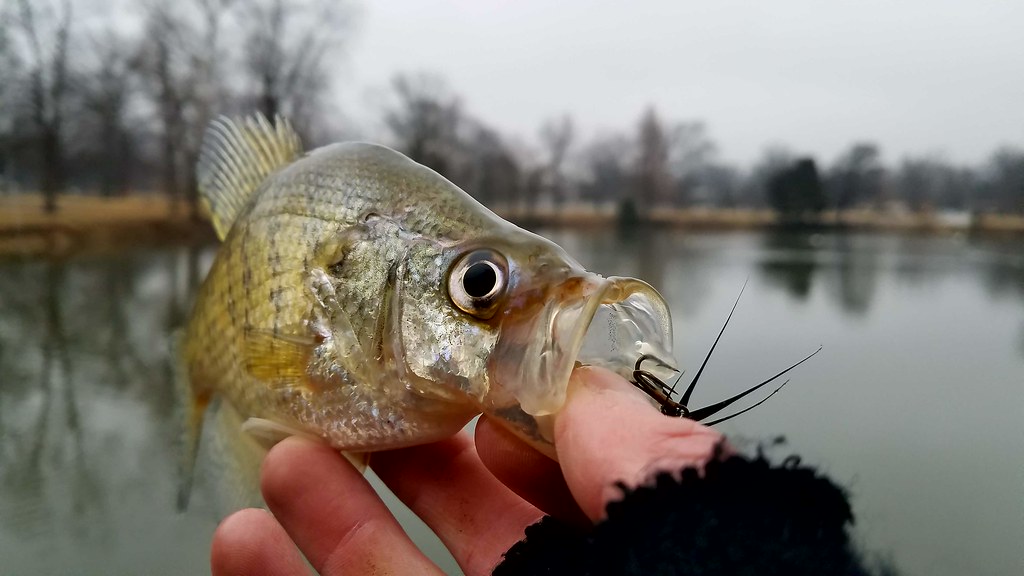 A week later and I was able to start putting some weight on my hurt leg. This opened up some new possibilities, though I was still limited to walking very short distances. The temperature had risen temptingly high and I just couldn’t stay inside anymore. I really wanted to catch something different, I was reaching my limit of catching the same bass and crappie over and over again. This led me to going on the search for a Warmouth! 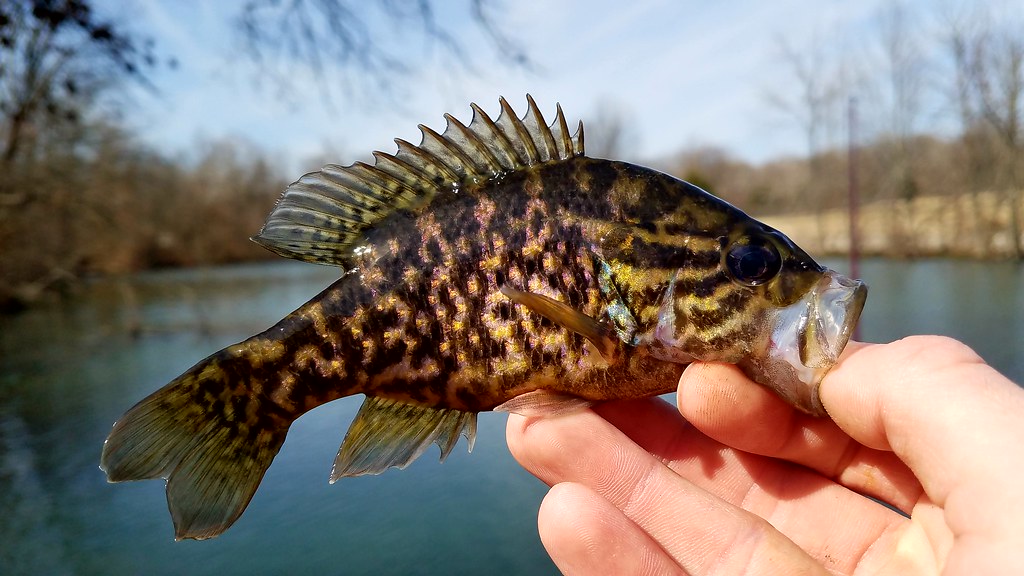 By the end of the month I was finally free of my crutches and was ecstatic to be walking around (even if it was with a limp). This opened up the possibility to walk to different habitats and target different species of fish. I started with trying to target Black Crappie, and somehow instead managed to catch some gorgeous hybrid sunfish. 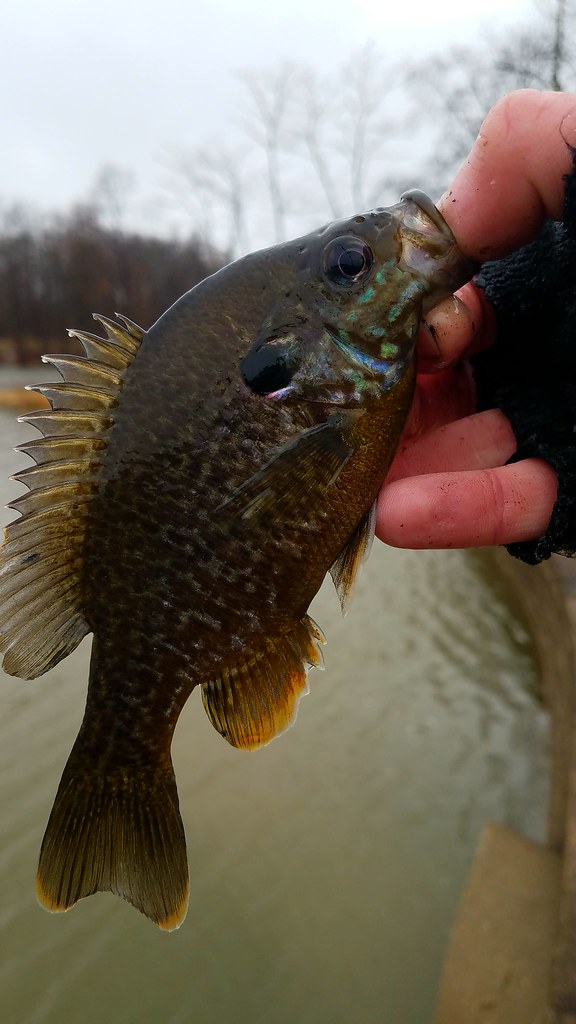 But with a little persistence I was able to get the Black Crappie to play a long too! 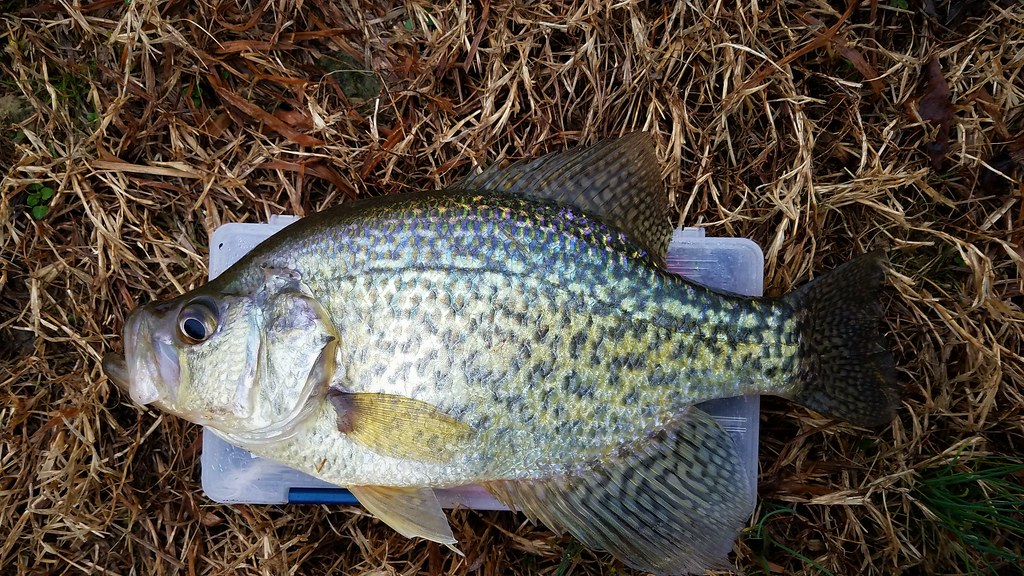 Having successfully caught the fish I was after I tied on a microfishing hook and decided to explore around and see if I could find anything new. To my surprise I ended up finding a new population of Blackspotted Topminnows! *Correction: After doing more research and sampling a larger size of this population it was determined that these were simply Blackstripe Topminnows that had more pigmentation above their lateral line.* 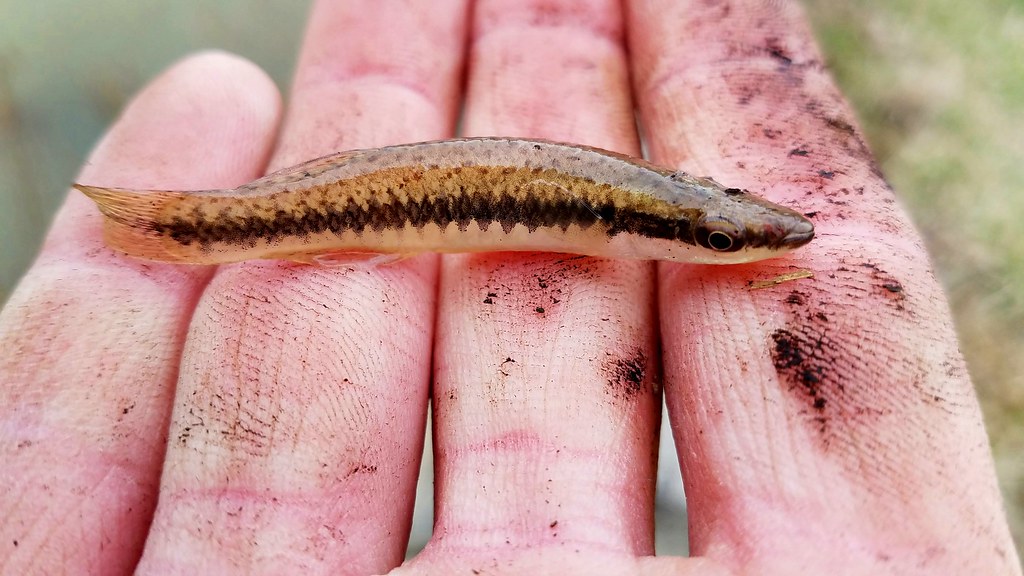 Along with the topminnows, I also found a number of juvenile sunfish. The coolest being this small Green Sunfish. 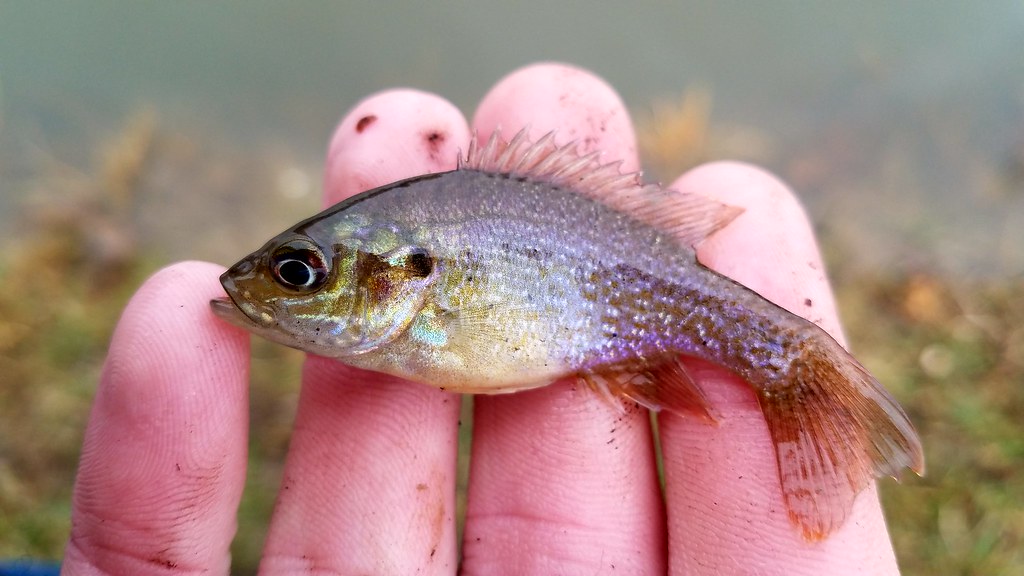 Seeing the little sunfish starting to move shallow I knew it was time to start shifting my focus more towards panfish. This seemed like a good excuse to tie on a jig and just explore around. I ended up settling on a new favorite ultralight jig that perfectly imitates a small crayfish. It even outperformed my usual minnow imitation jigs! 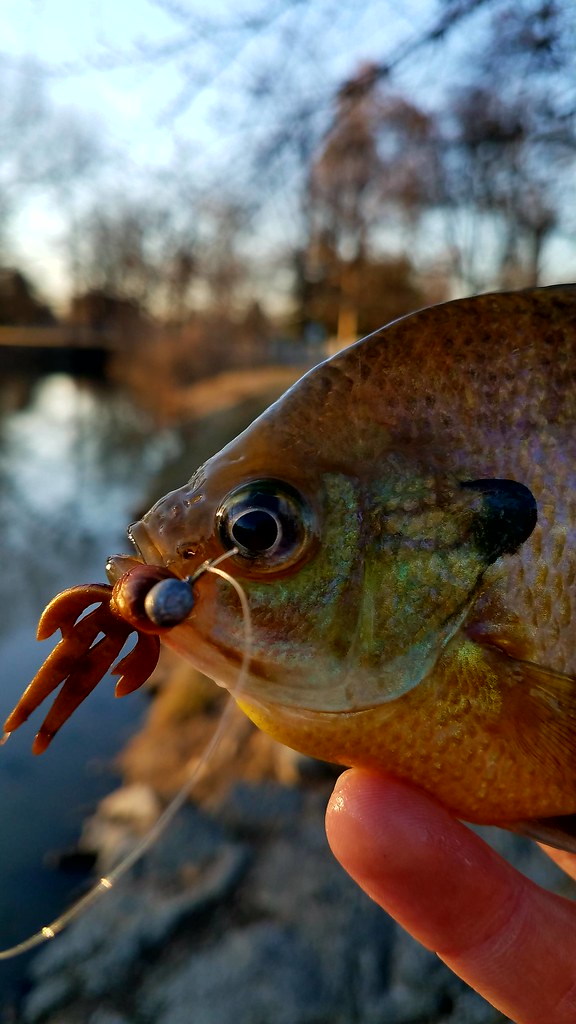 The final goal for the month was to catch a respectable Redear Sunfish. Luckily I know a few ponds that have strong populations of them. As a reward for making so much progress in physical therapy I reward myself with making a trip up to one of these ponds after work one day. There I was greeted with a good number of Largemouth Bass, Bluegill and most importantly some big Redear Sunfish. 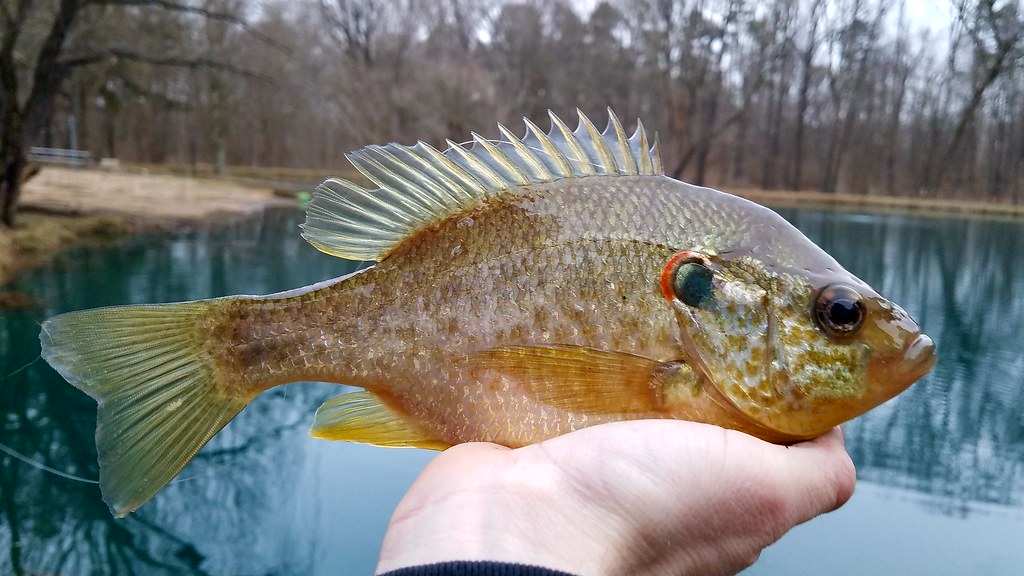 As February ends I can’t help but be incredibly thankful for all the people who have supported me through the last few months. I am incredibly lucky to have so many people willing to drop everything and help me. I have a new found appreciation for my health and am so grateful to be able to spend time outside again.

One thought on “February, Fish and Crutches”