This has been the year I finally embraced winter and truly started to enjoy it. What changed my mindset was experiencing real ice fishing for the first time. Before this year, I had never actually walked on a frozen lake, much less heard the ice sing underneath me. There is something deeply satisfying about having your feet planted on the ice and creating a small hole to see what fish are eager to bite beneath the surface. 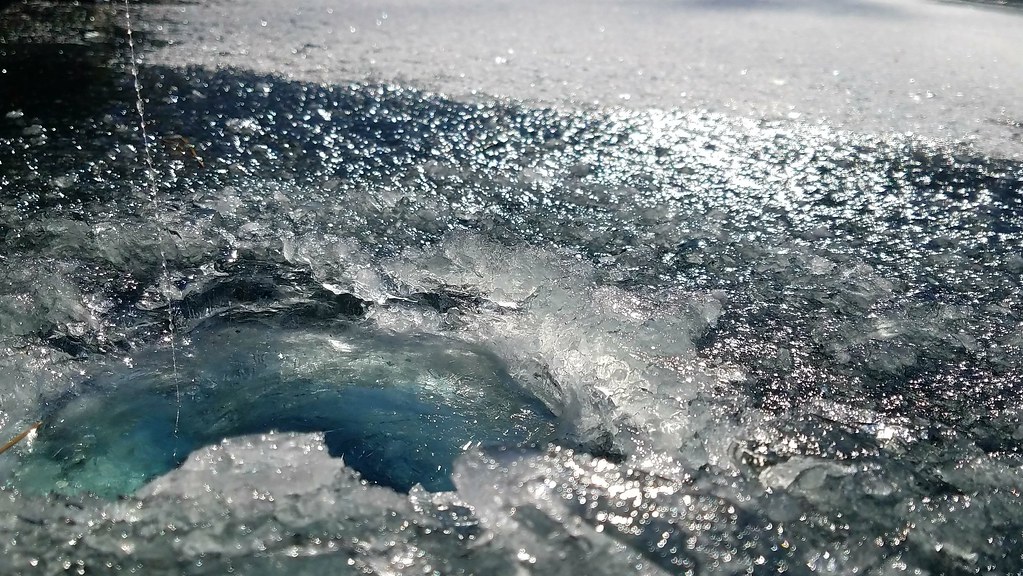 I think of ice fishing as a strange duality: mankind’s stubborn defiance of nature and complete unity with it. To some extent, one refuses to let nature take its course by creating holes through the ice (a clear sign from nature to keep out). Yet we do it anyway. We challenge the subfreezing temperatures for the chance to prove we can master the elements. But at the same time, we have to be one with nature to know where the ice is safe, where to make a hole, what depths to find the fish at, and what baits to use. This duality is what makes ice fishing so addicting. 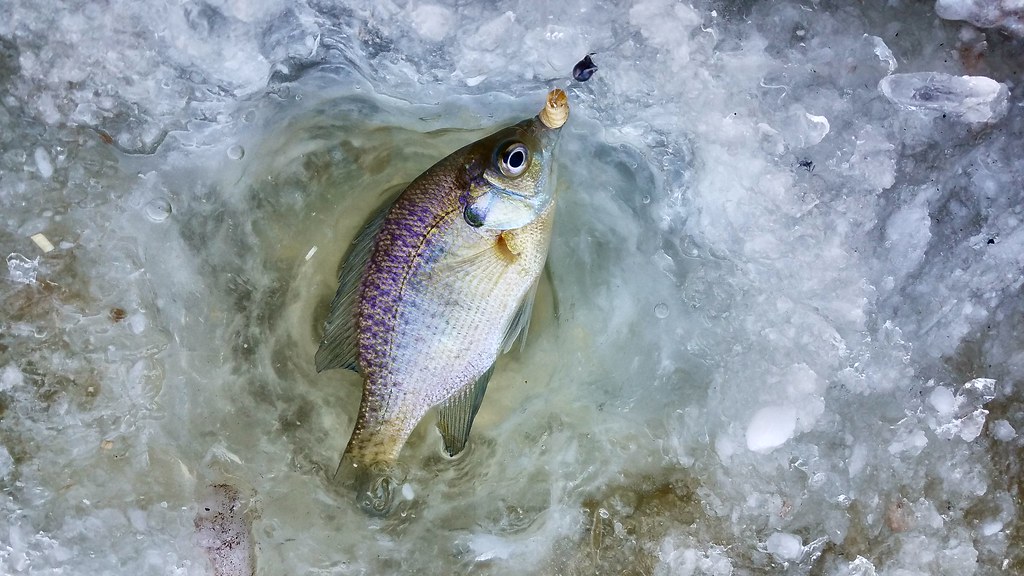 Another part of winter I have trouble resisting is the beauty of the sound. Snow-topped ice has the intrinsic ability to muffle all sound, muting the mundane, white noise of the city. Leaving just the sound of geese flying above you and ice creaking below you, in these rare occasions you can break out each separate noise and find its source. First, a flock of Canadian Geese; shortly after, a much more precious and less commonly heard song, the song of the White-fronted Goose. It echoes through the air and then is quickly muffled by snow. 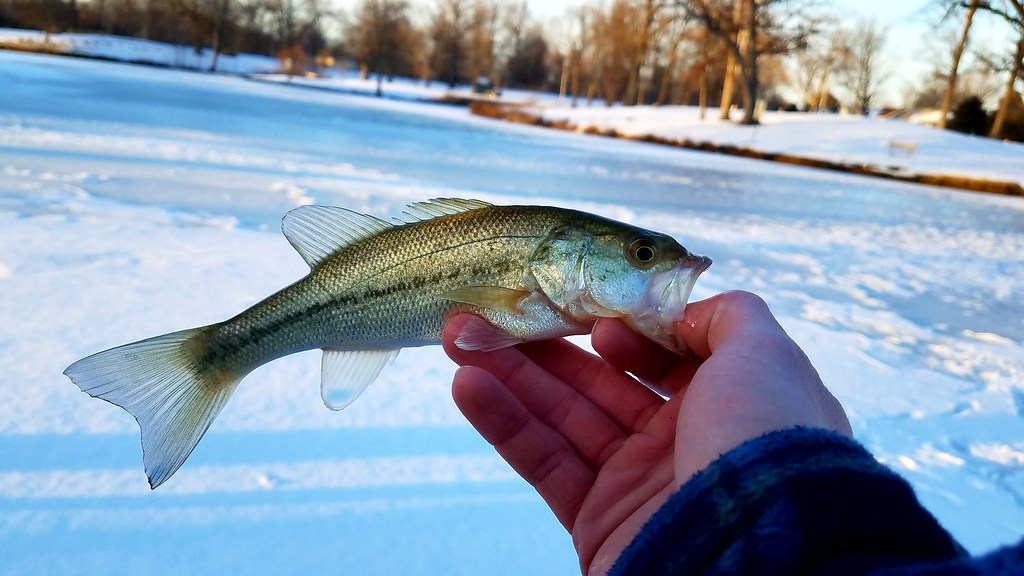 The sound of calling geese is a welcome change from the normal noise of car horns and people. The slow-biting fish don’t seem like much of a challenge when you can lose yourself in the meditative sounds around you. With enough patience, a reward is bound to follow. As the bird calls sound through the air, inevitably, the rod tip will bounce once. It’s usually a quick test bite to see if the offering is acceptable. Shortly after, a second tug on the line. This time, I’m ready and focused. The line twitches and the little ice rod is raised in the air, setting the hook. 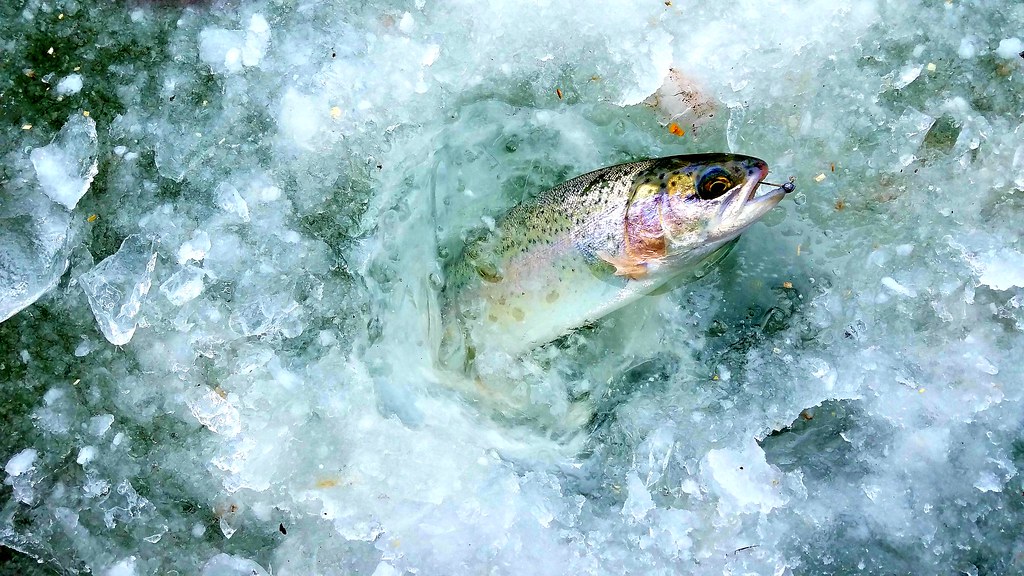 The fight begins. I have to keep the fish out of the structure I’m fishing, keep the line from nicking the edges of the hole, all the while keeping a very loose drag on light line. Fish fight in odd ways under the ice. Rather than making long runs like they do in summer, they tend to make quick, circular dashes. Occasionally, the larger fish will take a decent amount of drag, but more often than not, it is simply a matter of working the fish around in circles until it comes up through the hole in the ice. 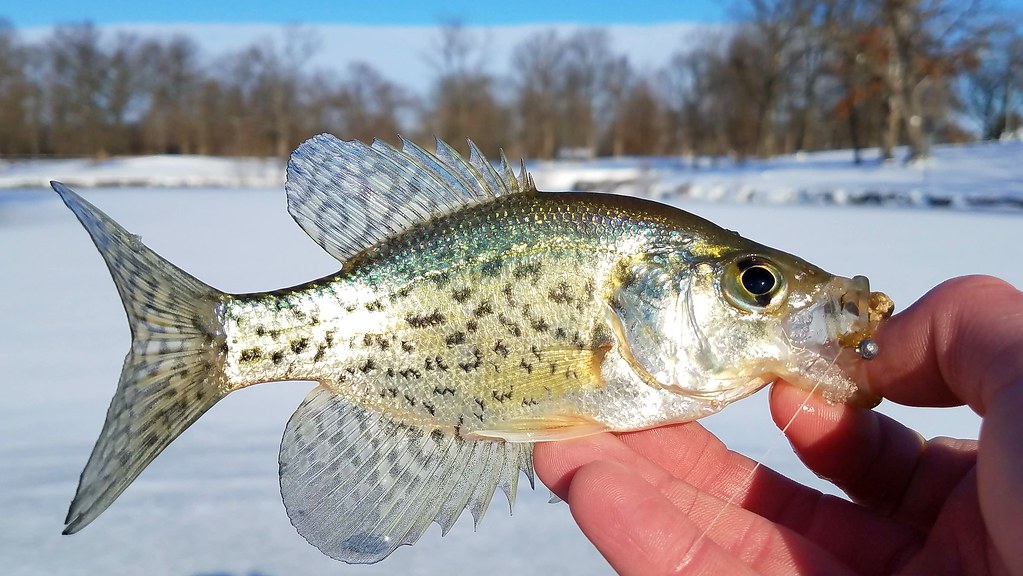 I swear the white snow makes each fish’s colors more vibrant. A simple Bluegill looks like a dramatic masterpiece against that amplifying background. My favorite sight is when a Redear Sunfish finds my bait before a greedy Bluegill. The lake I chose to ice fish here has notoriously low numbers of Redear Sunfish, so the competition is high and they haven’t rebounded like the Bluegill. For some reason, the winter has sparked a large concentration of Redears to frequent the structure I like to ice fish. So far this winter, I’ve caught more of them than I ever have historically in a whole year. To me, these are the prize catch on a cold, winter day. Their colors go unmatched in the winter scene; the trout can’t compare. 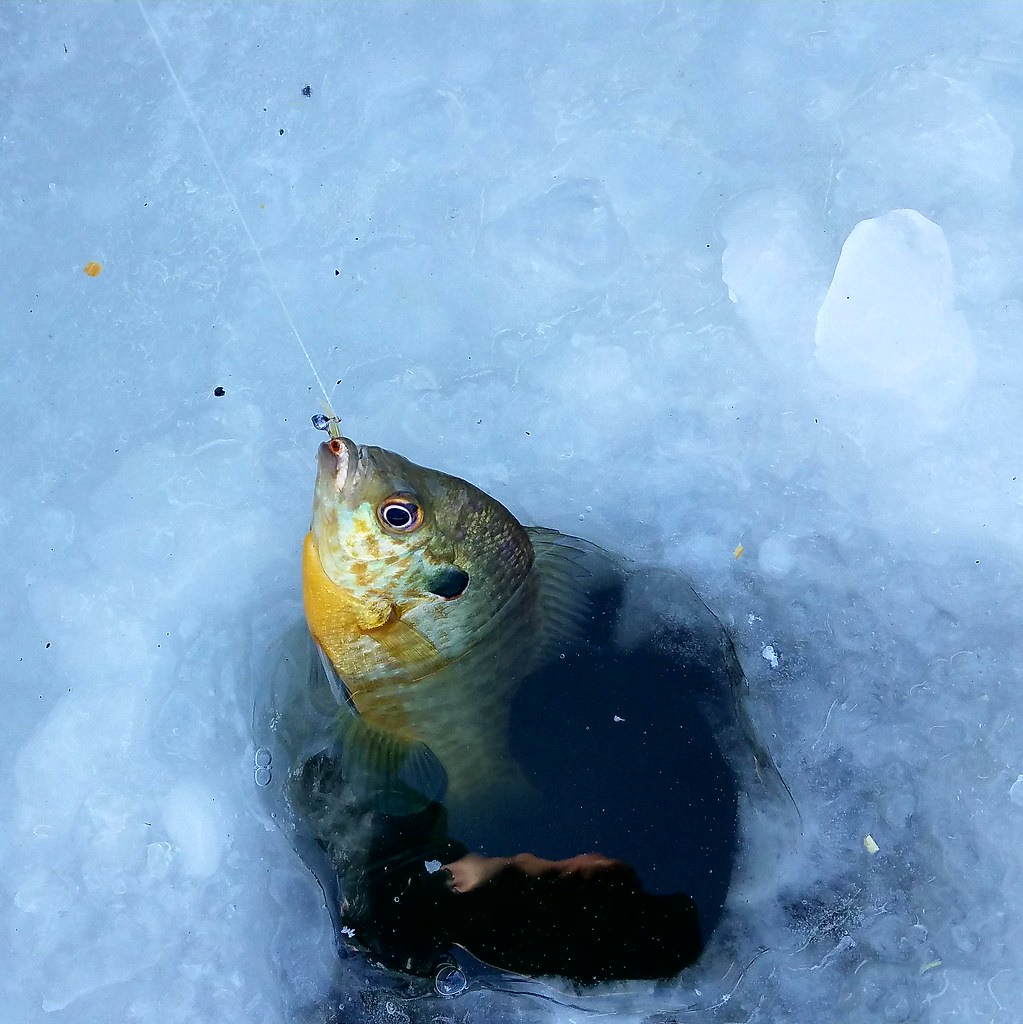 Southern Indiana’s winter is fickle. Before long, the temperatures rise and the ice and snow melt away, letting the city sounds return. But for a short week, this little lake is turned into a winter paradise. 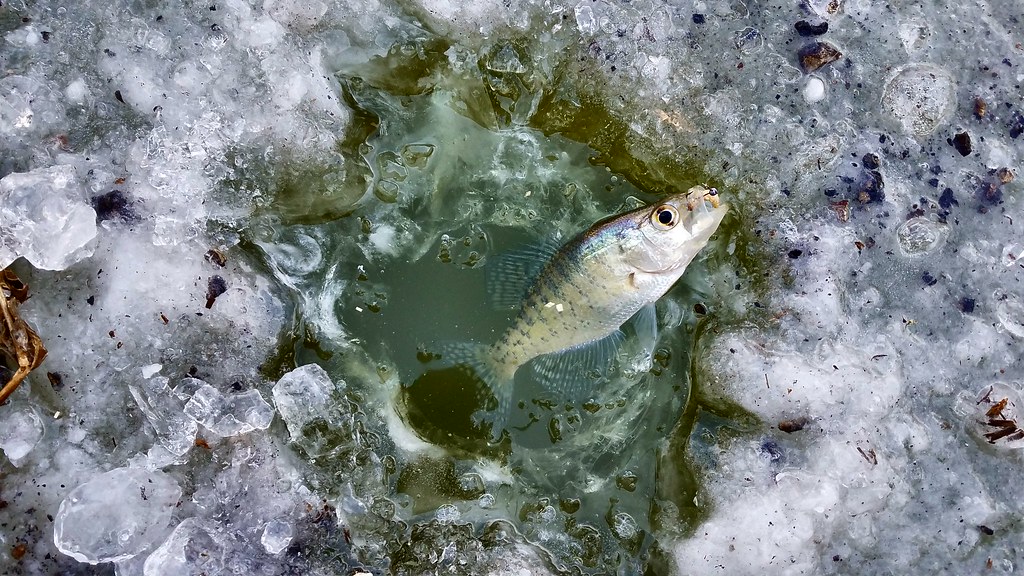 I enjoyed the last day of safe ice with a bittersweet feeling in my heart. Half of me was excited to see winter giving up its grip, but the other half was sad to see it go. I know each season has its own beauties, but winter has finally shown its true potential to me. As the ice saw its last sunset, I couldn’t help but marvel at the scene before me. The trees are perfectly silhouetted against a fiery sky, while the snow, ever peaceful, starts melting. The sound of ice creaking and popping is clear in the air. 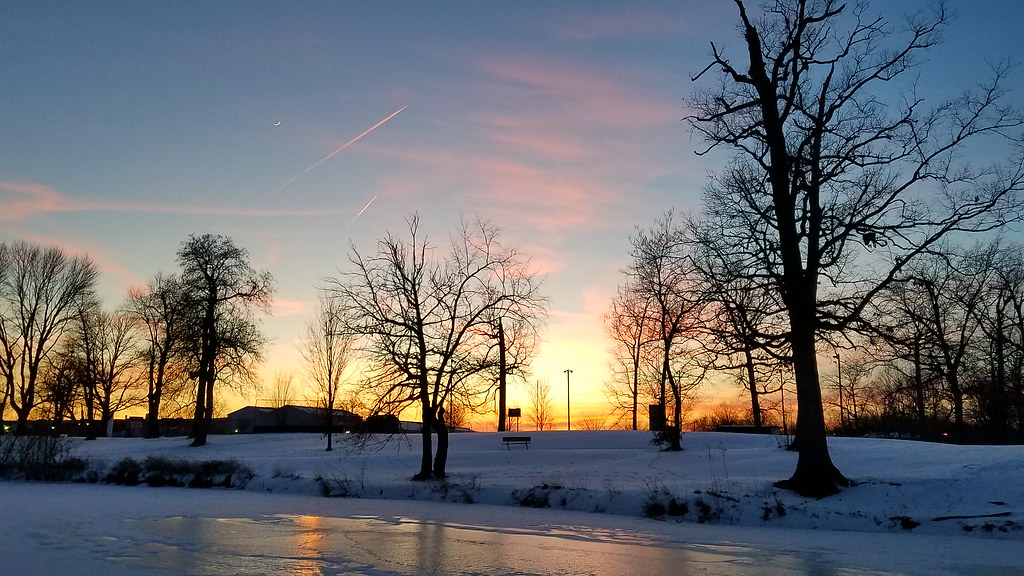 This was the end of ice season. Not even I was foolish enough to venture on the ice again. A quick warm front and rain made any remaining ice rotten. A week passed and the ice was entirely gone. The season may have been short, but it will happily be remembered for years to come. This will go down as the year I started to love winter.

One thought on “The Year Winter Changed Me”