Pigeon Creek is a fairly large creek that runs through a small section of southern Indiana before flowing into the Ohio River. For a lot of its history it has been known for being a heavily polluted waterway, and that view of the creek really hasn’t wavered in the area. There have been some improvements in the water quality of the creek, but I’ll be the first to admit this creek still has a long way to go before I’d ever consider consuming fish from it. That being said, the improvements made on this creek have made it one of the hidden gems of southern Indiana. This creek is often overlooked by anglers because of the stigma that this creek is terribly polluted, but I’m writing this article to try to get you to reconsider this waterway. 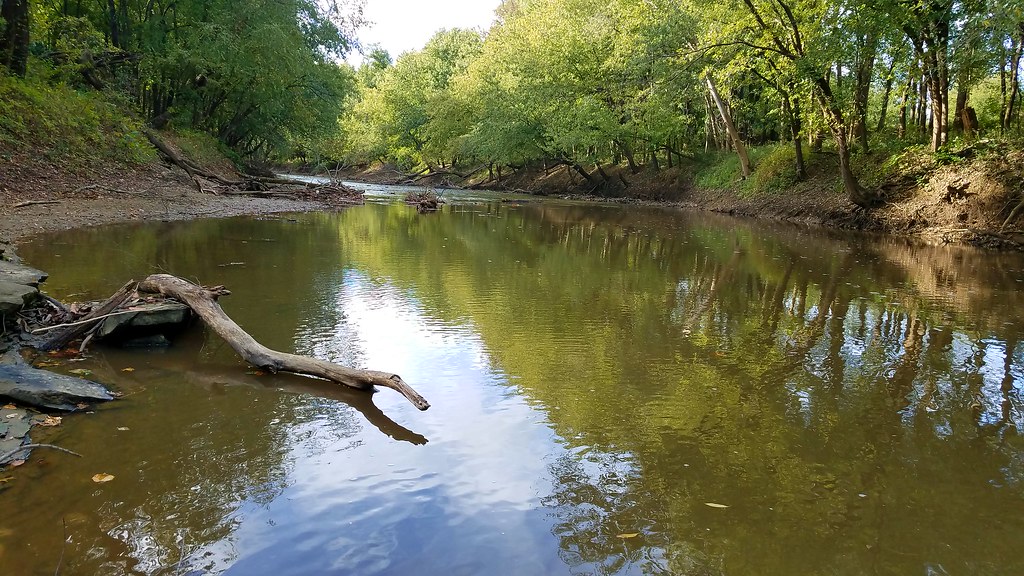 This creek has always offered good fishing year round, it just takes a little bit of searching to finding the places worth investing the time in. My favorite time of the year to fish it is in the late fall when the water levels have dropped very low and the pools are very obvious. The deeper pools always seem to hold fish, but the more interesting features to me have always been the runs between riffles, or the eddies formed by fallen logs in the current. These places tend to be overlooked by any of the few other anglers that venture along the creek. If you ever see me at the creek it will often be waded out in the riffles exploring spots like this to find new species. 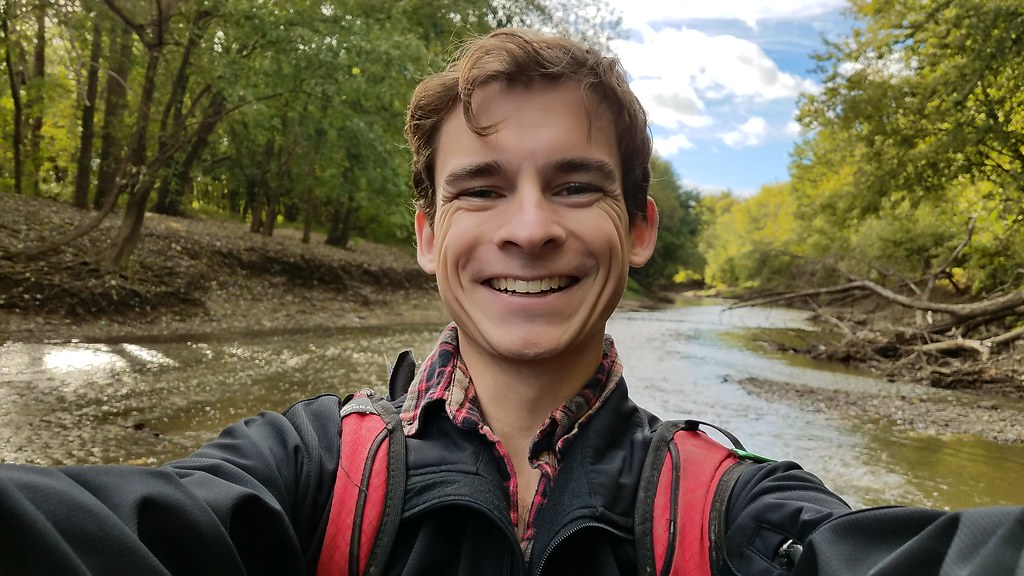 Me waded out into the riffles as promised

Wading the creek is not only relaxing, but gives you access to some species that most conventional anglers won’t catch. As you all should expect by now, this does mean I will be doing some microfishing in this shallow water and any good eddies I can find. You can’t seem to fish any body of water in Indiana without first coming across the humble Bluegill. 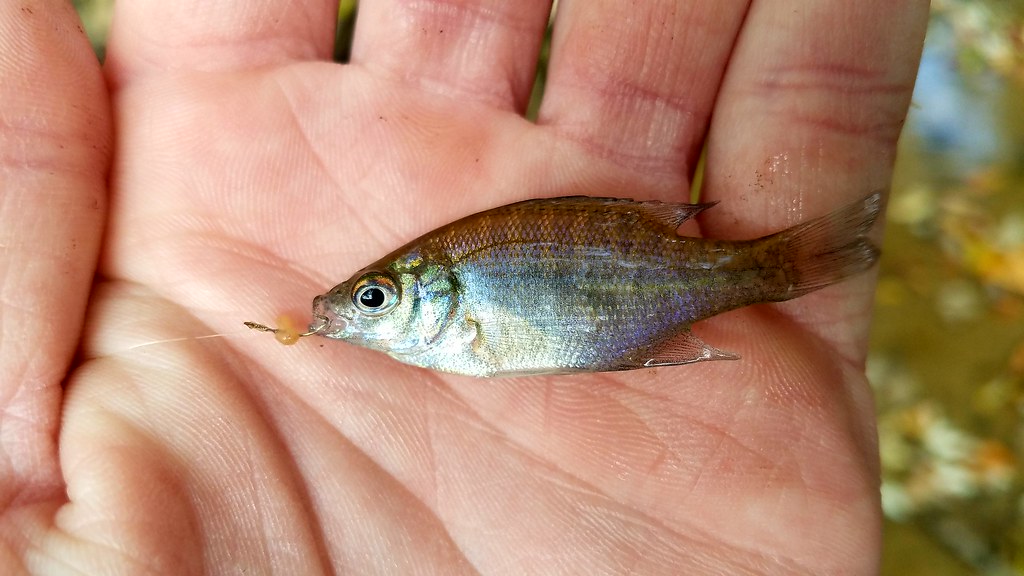 One of many small Bluegill, but a good sign

After catching a few small Bluegill, a new species found my bait! To my surprise this was a species I didn’t have on my list yet: the Emerald Shiner. While these are an incredibly common fish, I hadn’t ever put the time into finding a place to catch them. So that was an excellent surprise! 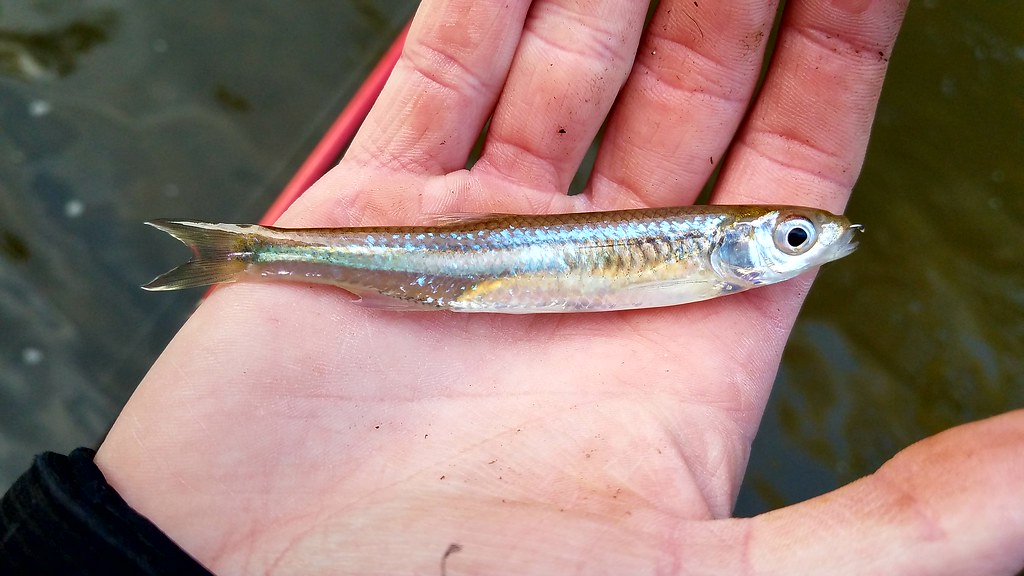 The first of many Emerald Shiners

Soon after that little fish I found a familiar face, a little Mimic Shiner! This has always been the main base forage species I’ve observed in the creek. 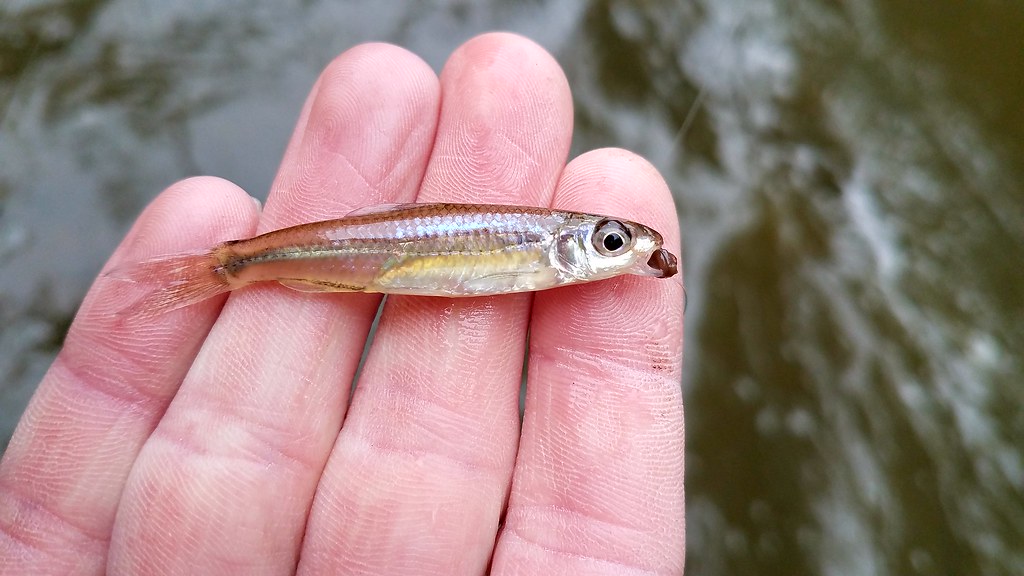 At this point I had lost count of how many Mimic Shiners and Emerald Shiners I had caught from the creek and was starting to give up on finding any other cool species in the eddies. On one of my last casts into the eddy something different found my bait. I was elated to find a Bluntnose Minnow (a species I had embarrassingly misidentified on my list previously)! 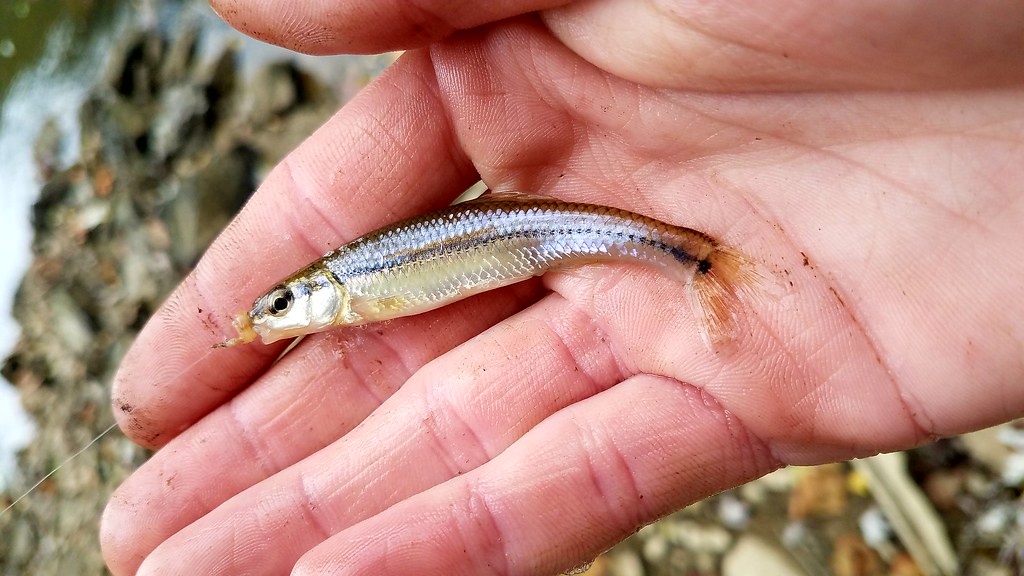 With this boost of confidence I fished that spot a little more and found another familiar face: the Spotfin Shiner. For some reason I forgot to take a picture of it in by the water, but I do have an image from my photography tank.

I figured for the sake of having an accurate sampling of the minnows I should also spend a little bit of time checking out the local topminnows/livebearers. I was secretly hoping I would find something new, but I think I knew better. As expected the local populations were Western Mosquitofish and Blackstripe Topminnows. 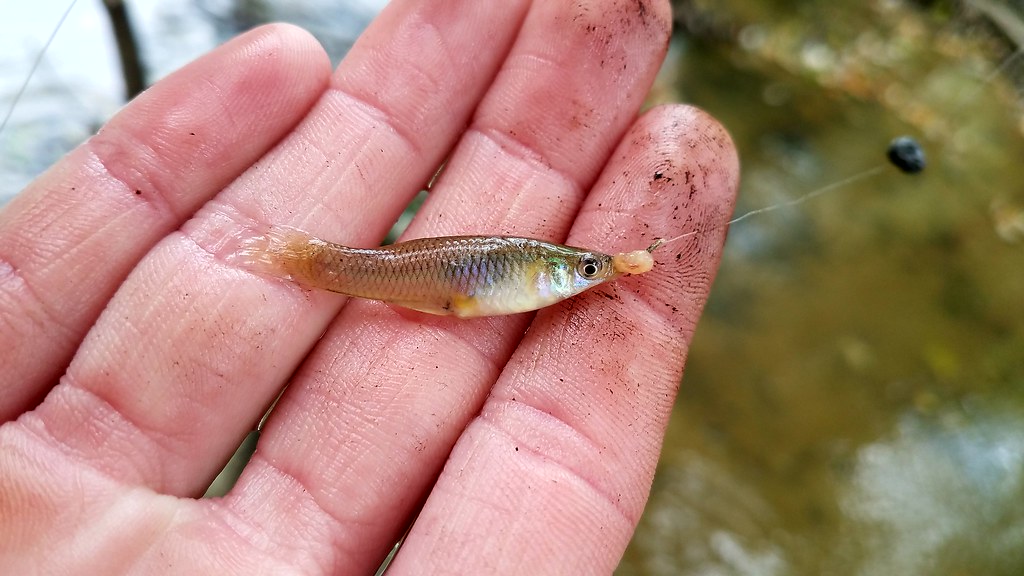 Western Mosquitofish, an incredibly common species in the calm shallows 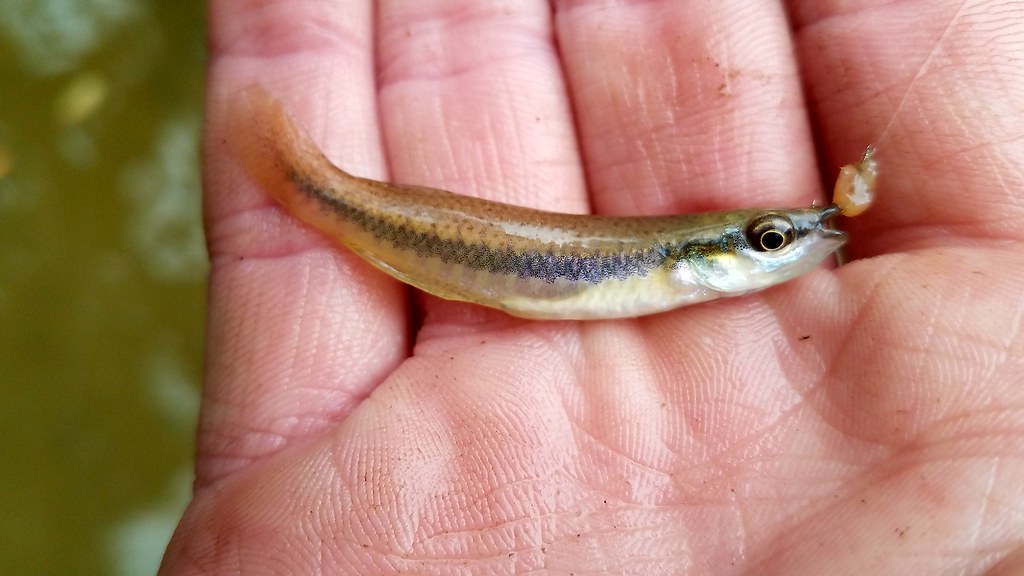 Blackstripe Topminnow, these seemed to be slightly less common to come across

Knowing my luck with the minnows was starting to run out I switched over to a size 16 fly hook and baited it with a small piece of worm and explored around in hopes of finding the sunfish that I knew had to be around. I was astonished that one of my first finds was actually an Orangespotted Sunfish! I had never sampled one from moving water before! 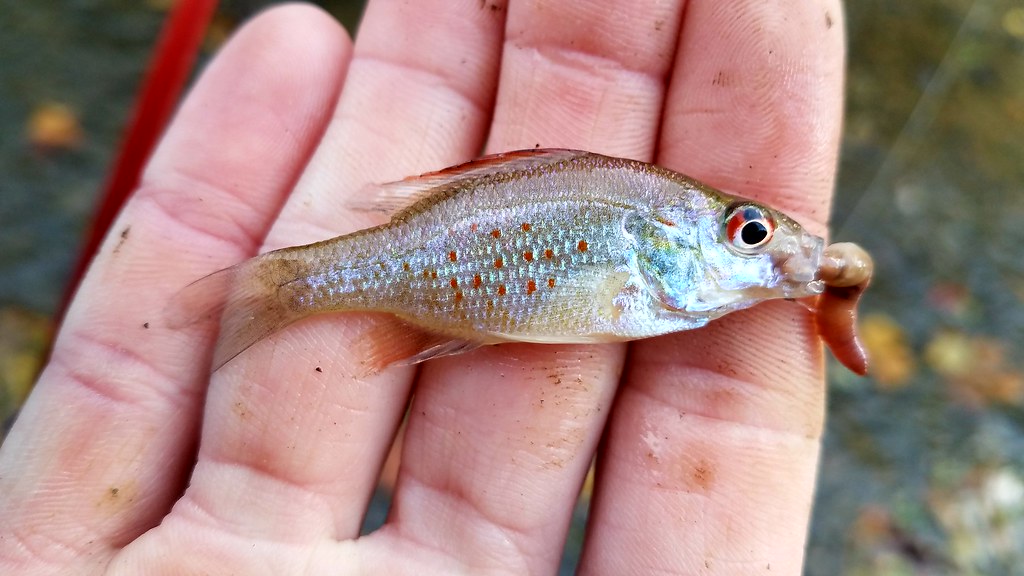 My first Orangespotted Sunfish from a flowing creek!

After this happy surprise I went on the search for a Green Sunfish. This stretch of creek has some rock formations that provide some excellent hiding places. And it is no secret that Green Sunfish like to hide in places they feel hidden so they can ambush anything that passes by. It only took dropping my bait by a few rocks before I had a bite. 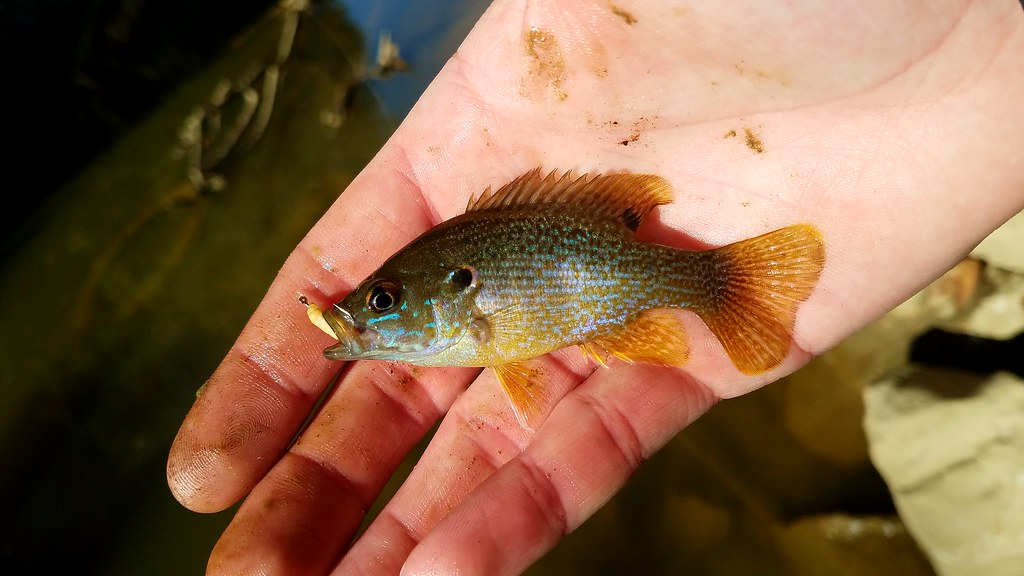 After catching a few more of his friends, I started the search for the bigger and more colorful species of sunfish. I already knew Bluegill lived in this creek, but I wanted a mature specimen for a picture so I waded for a while and found a good population of them. Eventually luck was on my side and I hook into a solid Bluegill, surprisingly the big ones were more willing to hit small cutbaits than worms. 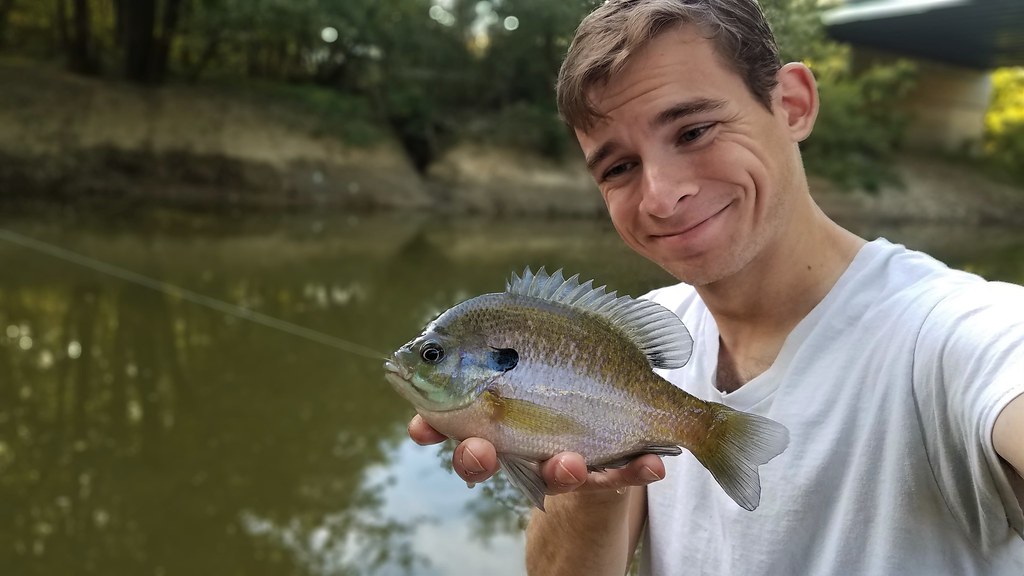 The best Bluegill the creek has offered yet

While searching for the Bluegill I had another less common catch, a Redear Sunfish. While it isn’t really a surprise that they would be here, I had never heard of one being sampled here before. 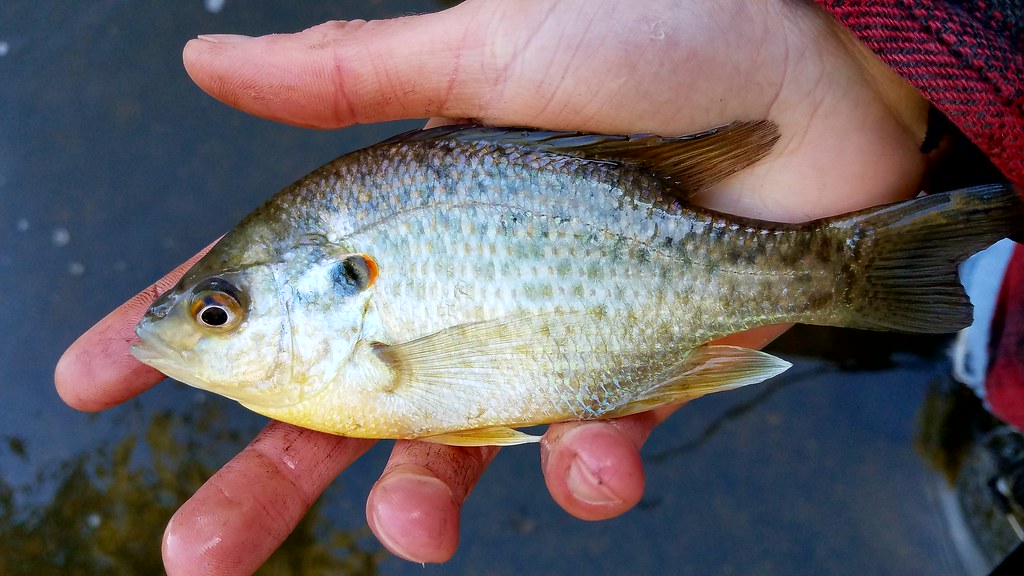 One of three Redear Sunfish I’ve caught from this creek

This brings us to the main reason I love creek fishing, this creek has a very strong population of Longear Sunfish. One of the prettiest sunfish in my humble opinion. It was hard to pick just one image to include in this post, but this smaller fish did the best justice to the colors that these fish have. 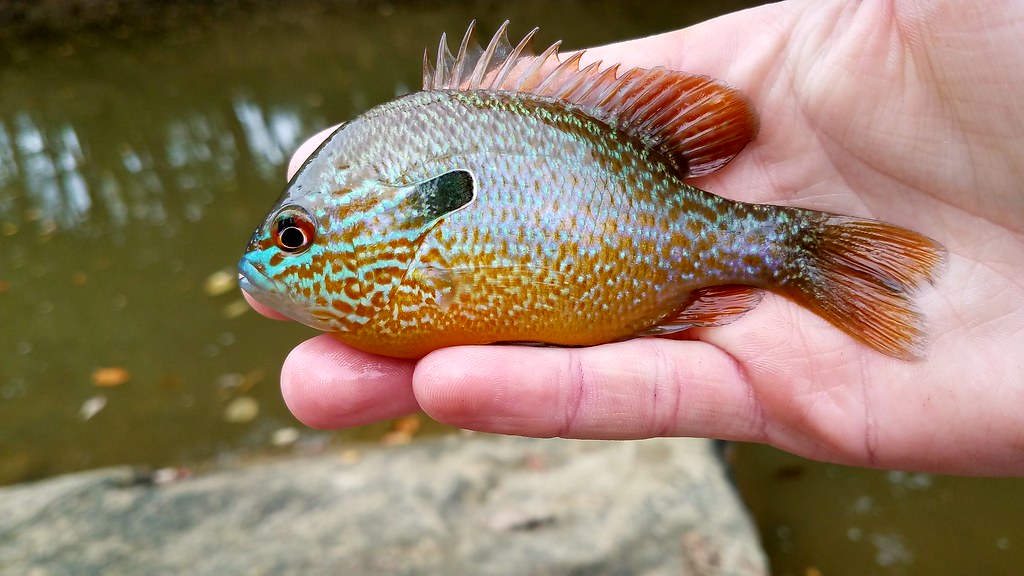 This creek has always been known to hold great numbers of Channel Catfish, and I can assure you that is still true. On my wading trips I’ve lost count of the number of juvenile catfish I have caught. The bigger ones tend to show themselves typically when it is least convenient. In my case after having two of my micro fishing hooks stolen! I rigged up a stronger setup and put a bait back in the same place. Before you knew it I was battling a decent Channel Catfish. 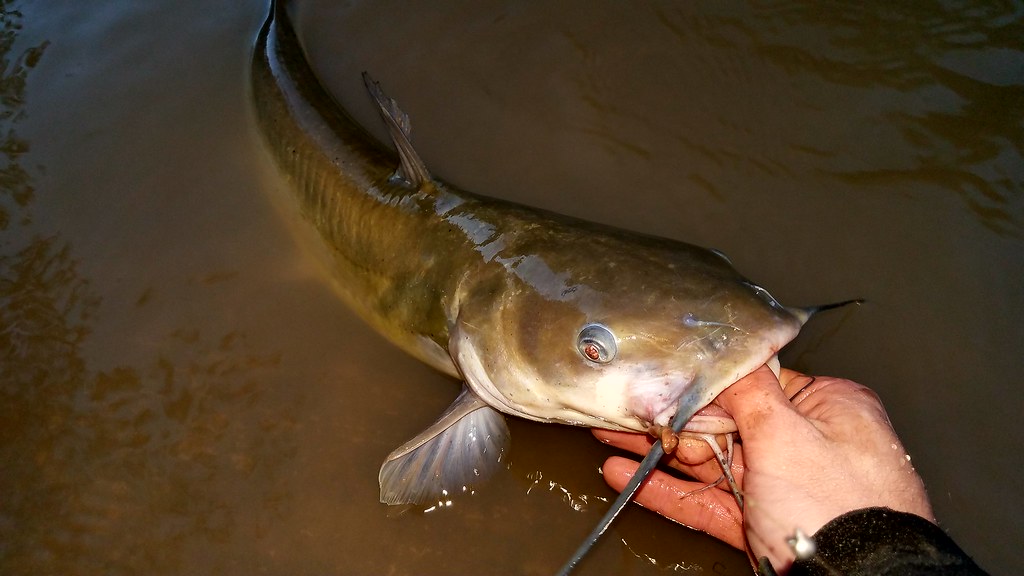 Along with the Channel Catfish this creek will also hold Flathead Catfish this time of year. I was lucky enough to cross paths with a micro version of this species while drifting worms in a deep pocket right before some riffles. I can assure you there are much larger specimens in this creek, but this was by far the coolest one I’ve come across yet. 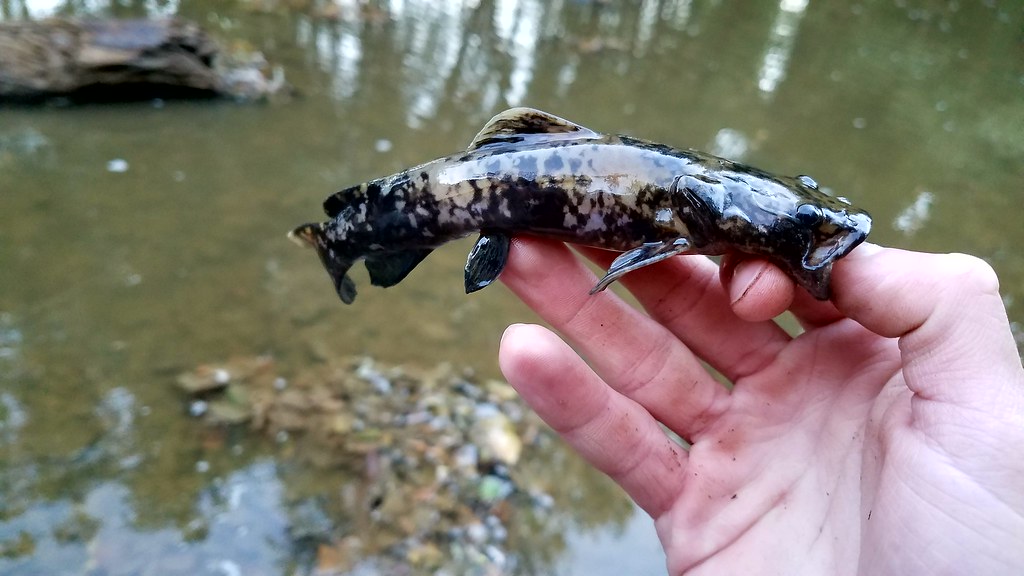 A juvenile Flathead Catfish, look at the camouflage pattern!

The final species that you expect to catch this time of year is the Freshwater Drum. I have a true appreciation for this fish, and am always happy to catch one (they force you into learning to detect very subtle bites, or you risk gut hooking these fish often). Along with the typical small Freshwater Drum you’d expect to find, I did manage to hunt down a few of the larger specimen (large being relative to this creek). 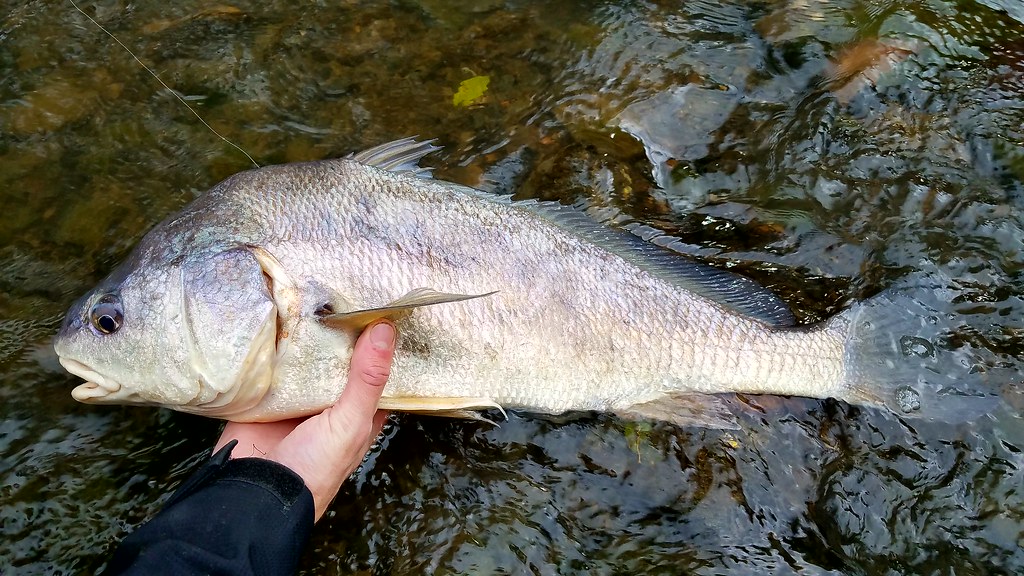 One of the larger Freshwater Drum from my recent wading trips

This creek holds many different species depending on the time of year, we haven’t even touched on the Blue Catfish that you’ll find in the spring or the amazing gar fishing that can be had in the summer. There are so many amazing species in this creek, and so few people are even willing to explore it. Hopefully this post will help change a few of your minds about this wonderful place.

I want to leave you with one final image, because sometimes a picture is worth more than words. If this creek was really so bad, why would a fool like me be this excited to be standing in the middle of it? I think the smile on my face every time I’m here would make a solid case in defense of the creek alone. 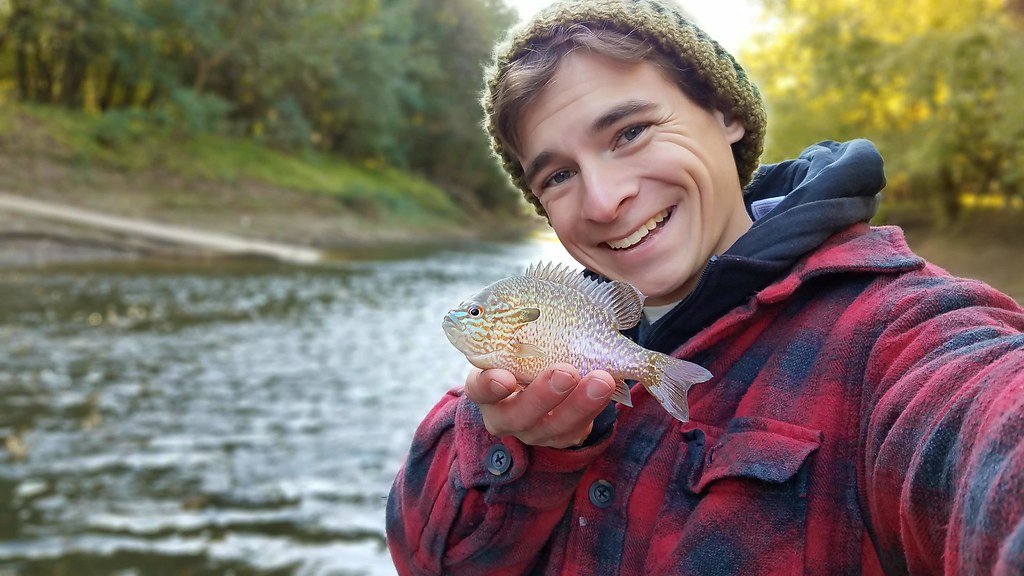